10 years ago today, I was lucky to get my artificial disc. Haven't updated since nothing has changed with regards to by back, but thought I'd drop a quick note to let you know all is still well. Not much has changed in terms of my back in that I'm still very lucky to have no back pain and still maintain an active lifestyle. I have continued cycling around 5000 or so miles (give or take 500) per year, many with my road cycling club. In addition, I cross country ski in the winter (mostly skate, but a little classic too), and have been hiking and doing some light trail jogging as well. Hope I get many more years out of the disc!

2015 was a great year for my back.  No issues with it at all.  I increased by cycling with my local cycling club and put in just shy of 4500 miles on my road bike with no back problems (or crashes) this year.  I have started training for the 2016 American Birkebeiner 50k (~31 miles) cross country ski race in February.  My goal is to just to finish without dying from exhaustion. My back has not limited me at all.  I am still cautious about lifting heavy objects, not due to any pain, but rather just a mindfulness of protecting my M6-L so that it will hopefully last for many years to come.  I'm still grateful everyday for the surgery that gave me my life back.
Posted by Tim at 2:52 PM 5 comments

Back in the saddle

Four weeks post back fracture and I'm feeling great.  I did a short bike of 20 miles on Saturday and it felt pretty good.  I was a little tired in the spot where I broke my back, but it was better than I was expecting.  The first week after the crash hurt pretty bad, second week was pretty achy, third week was a little sore, fourth week and no pain but I'm still not pushing it.  This recovery is a snap compared to the disc stuff, not that I would suggest either.  When you can feel yourself getting better everyday, it really makes a difference compared with the hopelessness of the never ending months of pain of a disc injury.  I think I'll start easing back into activities over the next 2 weeks with a few more gentle rides, being careful not to do anything stupid.  I go back for a follow up with my surgeon in the middle of August, but don't expect anything other than checking in with him.  The artificial disc has held up like a champ, with no problems at all.  This makes me feel a lot better about the disc, but I still remain cautious and will not use this as an excuse to try to be more daring.  I'm grateful for another bullet dodged.
Posted by Tim at 9:13 PM 4 comments

Visit to Orthopedic Surgeon for Broken Back

My orthopedic surgeon was kind enough to squeeze me in for a quick visit today.  After viewing the CT scan, he agreed that my L3 and L4 left transverse spinous processes had been fractured, but that my artificial disc looked fine.  Here are some pics from my CT: 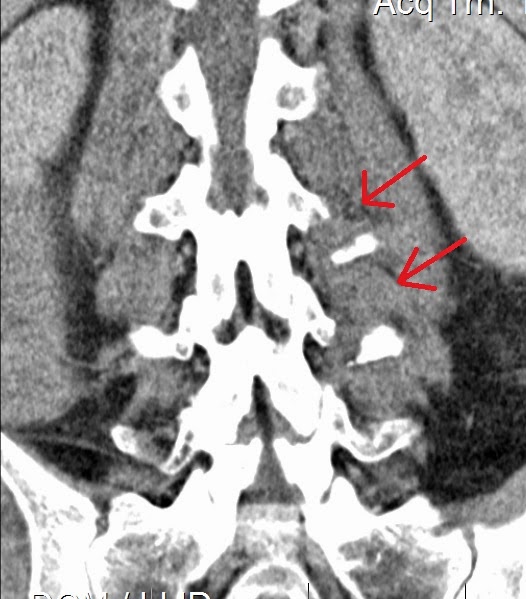 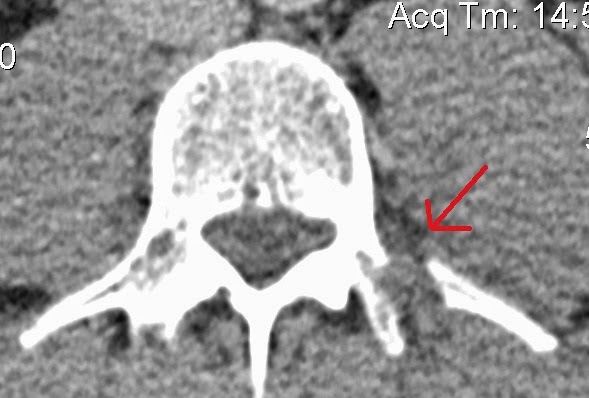 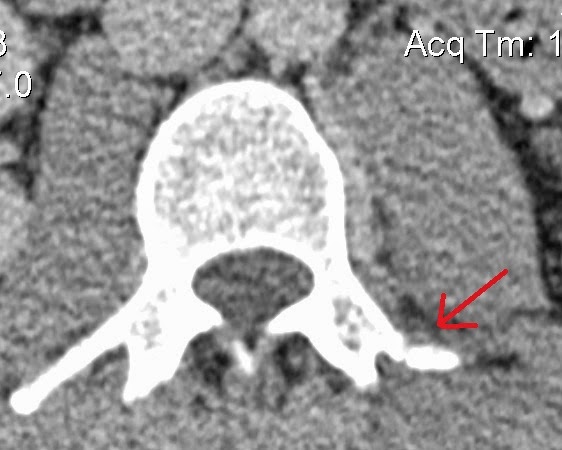 He said these types of fractures are not actually serious injuries, but are just very painful until they heal.  He also said that I had quite large gaps between the pieces of bone that had been broken off due to the tremendous force of the accident and he didn't expect them to fuse back together, but that this was not a problem.  I asked if I would be at risk for any spine instability due to losing the muscle connections on those parts of the spine and he said no (generally these fractures are caused by side impact or extreme muscular contraction of the psoas muscles which attach from the inside of the thigh to the transverse spinous process).

I was concerned that I saw some slightly increased curvature of the low spine (I already had a slight curve) and he said that it was most likely due to muscle spams/tension as a result of the injury and was not serious enough to be worried about.  So all in all, there is nothing for me to do but take it easy and come back in 6 weeks.  I was glad to get the reassurance from my surgeon who was familiar with my history and with artificial discs in general.  He also mentioned that the M6-L has grown in popularity since I had mine implanted and he was still frustrated that he still cannot use it in the USA due to it not being FDA approved (due to the 100s of millions of dollars and many many years it takes for a company to fund the needed trials) so the only option for patients to get it, is still to go overseas.  I'll post again if anything interesting comes up.
Posted by Tim at 3:17 PM 4 comments

Bike Crash and Broken Back

Firstly, let me tell you what I'm sure you're all wondering about, and yes, the bike is ok.  I haven't posted since last year because there was nothing new to report.  Everything was great, I was pain free and loving life.  After getting my first road bike, a Specialized Roubaix, last year, I had discovered a new found love of cycling.  I did 8 separate 100 mile rides last year and my mileage total came in at about 2400 miles for the season.  I was well on my way to shatter that mileage total this year having logged over 1200 miles and joining a cycling club when I hit a bit of a road bump yesterday.  Well, more specifically, while doing a 72 mile group ride with the club, a rider in front of me hit a very hard to see, yet very deep pothole and crashed.  This caused myself and a few other riders to crash as well.  I landed on my side, impacting the other riders and bikes between my pelvis and ribs on my left side.  After taking a second to asses the situation, I realized I had some back pain in my left lumbar area, and due to my previous back surgeries, I decided it best not to move.  In all seriousness, the last thing on my mind was my bike, and instead on the injuries of those around me and myself.  5 riders went down in the crash in all, 2 of us were taken by ambulance to the hospital.  At least I got a lay flat seat ;) 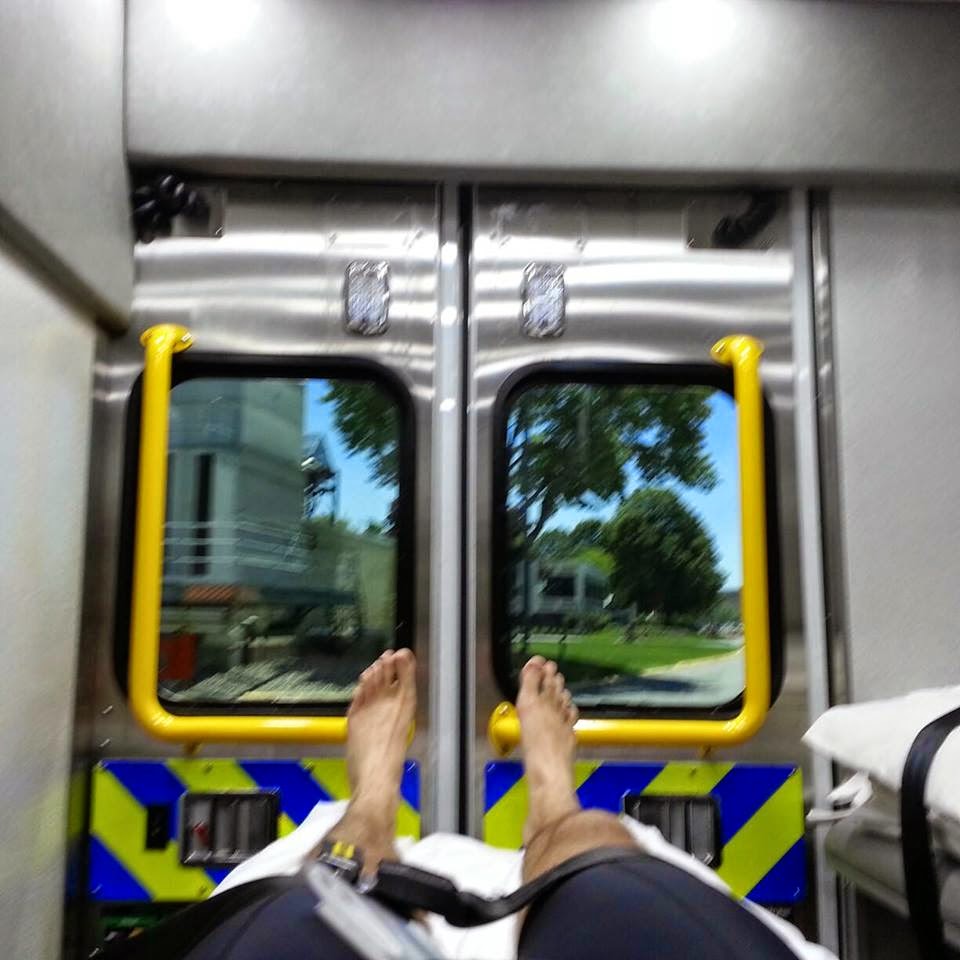 The rider who hit the pothole, and most likely who I fell on, suffered a broken clavicle and some broken ribs.  We were all wearing helmets which surely prevented life altering head injuries.  At the hospital, I received a CT scan and chest x-rays and awaited my diagnosis, hoping for at best, a torn muscle in my back, or at worst, newly herniated discs and potential damage to my existing artificial disc requiring rehab, surgeries and a new seemingly unending path back to health AGAIN.  The ER doctor came back in and told me that I had broken my back.  More specifically, I had broken the L3 and L4 transverse spinous processes on the left side.

He had done a consult with an orthopedist and said that I would not require surgery or a brace, but I should follow up with my orthopedic surgeon within the week.  He said the bones should heal within 4-6 weeks and I will just need to take it easy.  The good news is that it doesn't appear that any other discs were injured and my artificial disc looked fine.  I think this is a major vote of confidence in the Spinal Kinetics M6-L to be able to survive a bad bicycle crash at approx. 20mph which included an unnatural spine side bend to the side, although I would caution others not to try to replicate this experiment willingly, and to still treat your M6-L with caution and respect!!!  Today, I am pretty sore, and slow, although the pain is not as bad as when I herniated, and later re-herniated my disc before having it replaced.  I am again super grateful for my parents who came up to look after me for a few days and the friends, family, and new friends from my cycling club who have given me such support.  I may send an email to Dr. Chris Dare in the UK who took over after my spine surgeon in the UK, Nick Boeree was tragically killed and I will update again later after I meet with my orthopedic surgeon.
Posted by Tim at 5:04 PM 0 comments 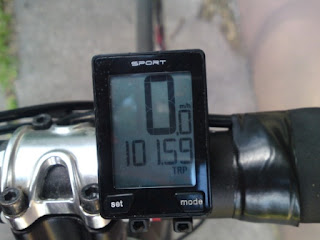 2 years ago today I was lucky enough to have my spine operated on by a very talented surgeon, Nick Boeree and his team.  I've come so far since then, so I thought it fitting to commemorate the anniversary with something I've never done before, something that would have been impossible without the gift I was given 2 years ago.  I rode 100 miles today on my bike.  My back was absolutely fine the entire way, just as it has been since I completed my recovery.  This ride also happened to bring my yearly mile total to just over 1000 miles.  I'm still grateful every day to have my life back, and after 2 years, that feeling still has not worn off.  Thanks, Nick.  The memory of you lives on in each mile.
Posted by Tim at 10:53 PM 8 comments

I had my 1 year check up with my surgeon about a month ago.  Nothing new to report other than I still feel great.  He had x-rays taken which still show the disc moving as it should.  He said from now on, I'll probably just need to follow up with him once per year, and didn't think he would even take x-rays next time.  I still have zero pain in my back.  I have gotten myself back into close to as good of physical shape as I have been in a long time.  I use my elliptical machine several times per week, do a couple of strength workouts with my resistance bands and I've been biking a lot.  I've worked by distance up to about 60 miles in one go on my old, heavy, mountain bike which takes me around 4.5 hours.  My back is a bit tired afterwards, but no pain.  I was looking into getting a road bike as I've really been enjoying biking, but after trying out a couple, I find that the more forward riding position does make my back feel a little weird so I think I'll stick to a mountain bike or maybe some sort of flat bar road bike.  I've felt completely recovered for quite some time now, but I am mindful of my back, and the memories of what it was like to be in constant pain are never far from my mind so I am pretty cautious and think I always will be.  I may not make very many posts as things seem to have been pretty constant for the last several months.  I will be sure to make updates if something changes, but if there are no more posts, you can assume all is well.
Posted by Tim at 9:57 PM 10 comments

Tim
A guy who suffered a badly herniated disc who, after multiple treatments, and surgeries, finally regained his life after getting a Spinal Kinetics M6-L implanted by surgeon Mr. Nick Boeree.

Links to other great resources